Shaking is the oldest form of meditation and trauma release in the history of humanity. Used by Indigenous peoples all over the world for thousands of years as well as land animals, especially land mammals.

Our Shaking Intelligence is a way our body assists in regulating the autonomic nervous system (sympathetic vs parasympathetic) to discharge sympathetic dominance (flight and flight/freeze) and trapped emotions that can cause physical and emotional dis-ease.

Shaking, both voluntarily and involuntarily is used by most land mamals as an anti-virus for the nervous system, decreasing stress, anxiety and blocked emotions that can cause depression and mental illness. These processes have been developed over millions of years of evolution by Mother Nature within the species and serves as the oldest medicine on earth for emotional release, trauma and PTSD.

To learn Shaking Yoga online now click here for classes or to study to be a teacher. 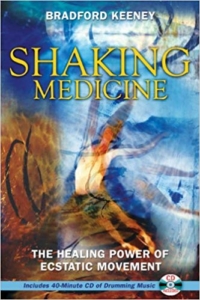 This ancient healing art has been incorporated in Religious groups such as the Quakers and Shakers Churches and the American Indian Shakers Church.

Also in a more modern medical-based setting, it is taught by doctors such as Dr Bradford Keeney (Shaking Medicine) and Dr. David Berceli (TRE) and by the late Dr.Alexander Lowen (Bioenergetics). In Taoist Yoga (Neidan) is it known as “Zifagong” (spontaneous skill).

Explanation of TRE from medical